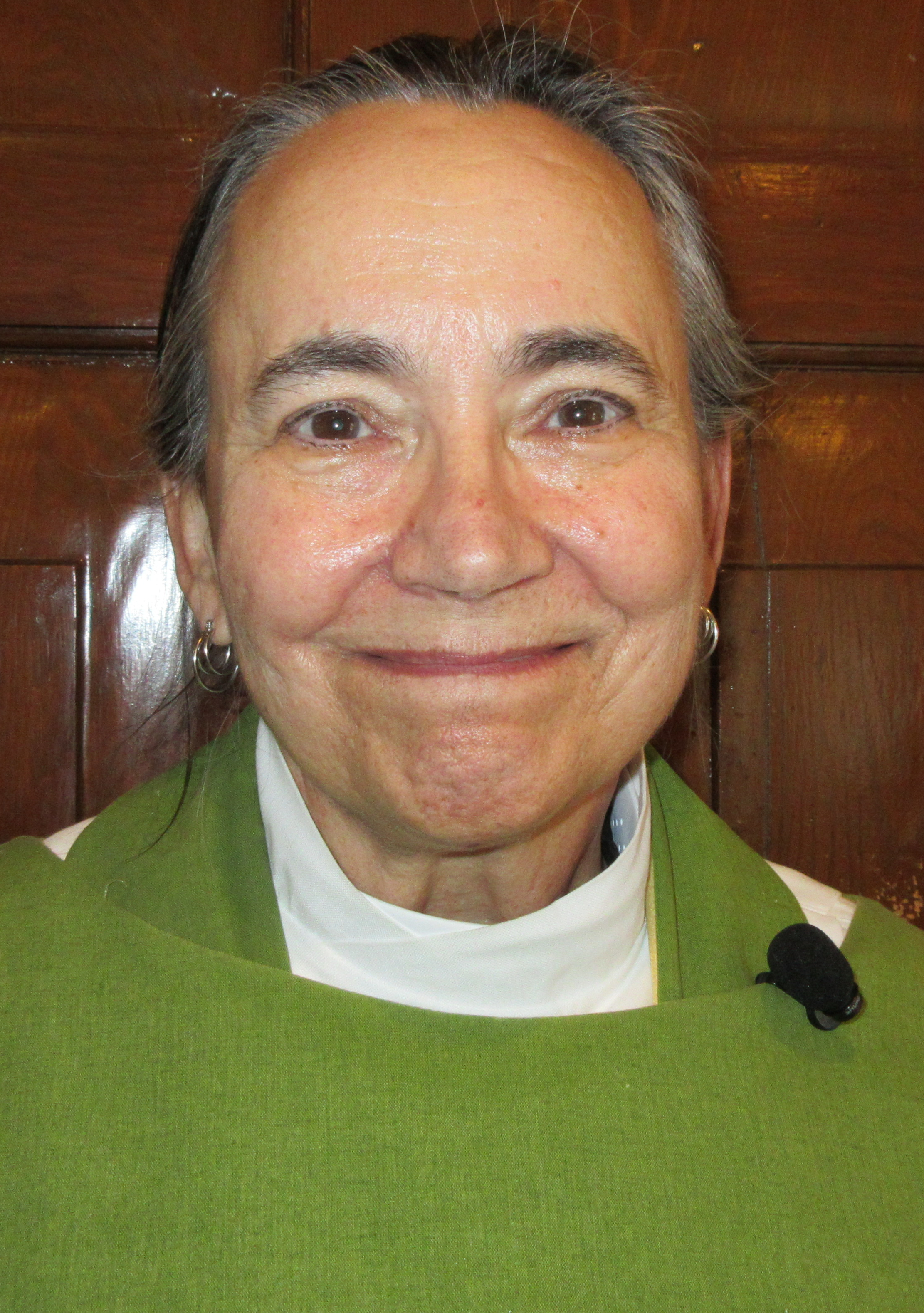 It's always a little awkward when somebody you've never seen before steps into your pulpit! You've never seen me before. I've never seen any of you before. My hunch is that it's a little unsettling when a strange priest shows up to stand at your altar and preach in your pulpit!
But thank goodness for The Book of Common Prayer! Although you and I have never met before, we are all people of the Prayer Book, so we have that in common. You know what to expect in the liturgy. It's one of the great things about being an Episcopalian.
I'm grateful to Father Tom for inviting me here, to preside and preach while he's out of town. So without further ado, Let's turn to the gospel lesson, and see what it has to say to us this morning, as a blind beggar named Bartimaeus literally stops Jesus in his tracks!
Jesus has been in Jericho. The first sentence of our gospel tells us that. And by this time in Mark's gospel, Jesus has a pretty good-sized crowd following him--the disciples and others who have chosen to follow him. Mark tells us simply "They came to Jericho." We don't know what they did in Jericho--Mark just tells us that they went to Jericho, then, in the very next sentence, that they "were leaving Jericho." The story of Bartimaeus begins when Jesus "and his disciples and a large crowd" are headed out of Jericho.
I think the mention of Jericho here is more than just a minor detail of geography.
Jericho is about a day's walk from Jerusalem. Jericho is the last place Jesus goes before he heads into Jerusalem for the big showdown with the religious authorities.
So Jesus is on his way to Jerusalem, on the road from Jericho.
Now, because we've read the Gospel of Mark and the other gospels, we all know what's going to happen to Jesus when he gets to Jerusalem. We know how the story of Jesus's earthly life ends--it ends with betrayal, arrest, torture, and death.
So the sand in Jesus's hourglass is running out.
We know what's in store for Jesus when he gets to Jerusalem. And Jesus knows what is in store for him when he gets to Jerusalem. How do we know this? Because Jesus has tried to tell the disciples. He's tried to tell them what's about to happen, not once, not twice, but three times! Jesus has tried three different times to tell the twelve what's going to happen in Jerusalem, but they don't seem to take it in.
For example, Jesus predicted his own passion and death for the third time at the beginning of Chapter 10, when, Mark tells us:

They were on the road going to Jerusalem,
and Jesus was walking ahead of them...
[Jesus] took the twelve aside again and
began to tell them what was to happen to him,
saying, "See, we are going up to Jerusalem, and
the Son of Man will be handed over
to the chief priests and the scribes, and
and they will condemn him to death;"

Jesus goes on to tell them he will be mocked, and spit upon, and flogged, and killed, "and after three days will rise again." (Mk. 10:32-34)
I'm not sure how much more plainly Jesus could tell them! But even after three attempts, the disciples seem either unwilling or unable to hear this news. They are much more interested in who might get the seats of honor next to Jesus in his glory.
Back to the story.
There's this large crowd around Jesus and the disciples as they set out from Jericho towards Jerusalem. And there, on the side of the road, sits Bartimaeus, a blind beggar. Mark tells us:
When [Bartimaeus] heard that it was Jesus of Nazareth,

he began to shout out and say,
"Jesus, Son of David, have mercy on me!"

But Bartimaeus fails to get Jesus's attention--Jesus and the crowd continue walking down the road. (Query: how did Bartimaeus know it was Jesus, if he couldn't see? Maybe he had some help.)
Then some people in the crowd who did hear Bartimaeus shouting at Jesus tried to shush him! Mark says:
Many sternly ordered [Bartimaeus] to be quiet.
Mark doesn't tell us whether the "many" trying to shush Bartimaeus were just random members of the crowd, or whether the disciples got in on the act. We just don't know.
But the point is that the attempt to shush Bartimaeus didn't work. Bartimaeus, in fact, ratchets up the volume, and cries "even more loudly,

And that's what stops Jesus in his tracks.
Well, the rest of the story unfolds pretty quickly. Jesus, standing still there on the Jerusalem road, says, "Call him here." I mean, don't forget, Bartimaeus is blind, so he can't see that Jesus has stopped!
So Jesus seems to enlist the help of the crowd, asking them to "call him here."
So somebody, or somebodies, say to Bartimaeus:
"Take heart, get up, [Jesus] is calling you."
"Take heart, get up, he is calling you."
When Bartimaeus hears that, he throws his cloak aside, "springs" to his feet, and makes his way to the place where Jesus is standing.
Jesus asks Bartimaeus, "What do you want me to do for you?" Bartimaeus asks Jesus to heal his blindness, and "immediately" Jesus does, saying to the man,
"Go, your faith has made you well."
And Bartimaeus becomes a follower of Jesus, and falls into step with the crowd on the road from Jericho to Jerusalem.
It's quite a vivid story! Notice that Mark tells the story with great economy of language. He describes what happens in just a few sentences. It's sort of like the way a Japanese print paints a scene, in just a few brushstrokes.
But I think this short scene has a few things to say to us about Jesus, about Bartimaeus, and about the crowd, about seeing and not seeing.
One of the first things that stood out to me is the fickleness of the crowd in this story.
At first, the crowd tries to shush Bartimaeus--sternly ordering him to be quiet
and to stop shouting Jesus's name, as if they are playing a game of "Keep Away" from Jesus.
But two sentences later in the story, the crowd goes from trying to keep Bartimaeus away from Jesus, to actually helping Bartimaeus get to Jesus!
And the crowd helps in at least two ways.
First, they say to Bartimaeus, Take heart; get up, [Jesus] is calling you. Take heart; get up, he is calling you.
Second, the crowd must've somehow assisted blind Bartimaeus in making his way to Jesus--Bartimaeus, being blind, had to have had some help to make his way from the side of the road, where he was begging, to the place where Jesus was standing.
Whether they used their voices or their hands or somebody led him by the arm--we don't know exactly. But somehow some way, the crowd helped Bartimaeus make his way to Jesus.
And maybe that's part of the gospel message for us this morning--maybe we are called to do what the crowd did that day with Bartimaeus--maybe we can play a role in getting people to Jesus!
Perhaps we can be instruments in the lives of others helping bring them to Jesus! Maybe there's a Bartimaeus in your life somewhere! Maybe there's somebody you know who needs the healing and hope that Jesus offers.
Maybe you can play the crowd to another Bartimaeus! Maybe that's part of what communities of faith can be for one another: to guide others gently into the presence of Jesus.
Or maybe you, yourself, are Bartimaeus in some way. Maybe you are broken or stumbling or blind in some way and in need of healing. Then perhaps others in your life
can play the crowd to your Bartimaeus.
Perhaps others can help you make your way to Jesus by their words or actions, to guide you in some way into his presence..
But I also wonder if the story of Bartimaeus suggests that sometimes we have to make a nuisance of ourselves to get Jesus's attention! Bartimaeus, after all, when he learned that it was Jesus who was passing, made a little racket to try to get Jesus's attention, then made a little more racket, shouting

"Jesus, Son of David, have mercy on me!"

And that's the cry that stopped Jesus in his tracks that day. His shout was the catalyst that eventually brought Bartimaeus into Jesus's presence. Maybe sometimes that should be our shouted prayer:
"Jesus, Son of David, have mercy on me."
Finally, I am struck by the contrast between blind Bartimaeus, who sees who Jesus is, and the disciples, the twelve, who are blind to who Jesus is!
This seems to be a story about seeing and not seeing. The twelve can't seem to see who Jesus is, even though they've been following him for about three years! Bartimaeus, on the other hand, sees exactly who Jesus is, even though he is literally blind.
Ironically, it is blind Bartimaeus who sees, and the sighted disciples who don't see who Jesus is.
So the story of blind Bartimaeus is a story about seeing and not seeing, about understanding and misunderstanding, and about how we are called to help one another make our way along the road to Jerusalem--how we need community to help us get to Jesus.
Get up, take heart; he is calling you.
Amen.